Here’s a few of the rumors we’re likely to see with iOS 8 at WWDC:

Out of the 11 items above I seriously doubt we’ll see six, seven and eight. They just don’t seem to make sense on iOS. I also highly doubt we’ll see number one right now. It might be something that’s released in September, but not now. Ditto for number two. Number three strikes me the strangest of the group. The cable is only two years old, I doubt they will make any changes to it. If they do I bet they will make the cables more robust, or modify the connector so that it is less likely to degrade. There have been reports that people have been having issues with the contacts on the lighting connectors failing.

With those out of the way let’s discuss what will probably happen.

Number 4 might happen. It seems like a good transition from the PC era to the post-pc era. If the iPad is truly a replacement for the PC then it will need to have some form of multi-tasking.

Number 5 is also likely to happen, but it may not be announced at WWDC. More likely than not it will be announced when Apple unveils the iWatch, or whatever they’re going to call it. I will also go on record as stating that the iWatch is actually the next generation of the Nike Fuelband. I believe that Apple and Nike have come to an agreement and Nike will be the de facto fitness division for Apple.

The Shazam integration with Siri also seems to make sense. It fits with the other types of integrations we’ve seen to date with Siri. Instead of an open api we have vetted partners that agree to integrate with the service. This controls the experience and in Apple’s opinion creates a better experience.

The redesigned notifications center also makes sense if for no other reason than the fact that no one understand the difference between the three tabs that are currently present. We have the Today tab that tells me my appointments, stocks and weather. We have the All tab that shows me my notifications and what I missed. We have the Missed tab that usually shows me nothing because I already saw the notification somewhere else. (most likely on the All tab). I for one think this will be a welcome change.

Finally there’s the wireless version of CarPlay. I just recently got a new Ford Focus that has Bluetooth and I believe that the ability to wirelessly integrate with a smartphone in the car is Genius. I do have two small caveats with it though. The first is that current track information is not sent via bluetooth. I assume this is something that CarPlay would address. Secondly when you’re connected to the car wirelessly then you’re not charging your phone. That’s fine for short trips, but it’s lousy when you’re going on vacation and you have an eight hour drive. That remains the one advantage of wired access. Your device is being charged while you use it.

So, just to recap here are the things we will likely see at WWDC. I believe the following will be shown or hinted at:

4. Multi-tasking on the iPad.

5. Healthbook – a new take on Passbook for health related apps.

10. Redesigned notifications with only two tabs instead of three. Source: Multiple

I have several complaints about Apple technology that I want to address in this post. Some things will be iOS specific, while others will apply to Apple as a whole. Some of these things are similar to what existed in my previous post prior to the release of iOS 7.

1. In iOS 7 whenever you play a video in Safari it is not at all apparent which words are actionable buttons and what is simply a label. In the screenshot below the only thing that looks actionable is the slider for the time. The Done, Maximize, Back, Pause, Next and Airplay buttons are all grayed out. Normally that would mean you can’t use them. In this case however all of them work. A new user (or  advanced one) will not know what to press. 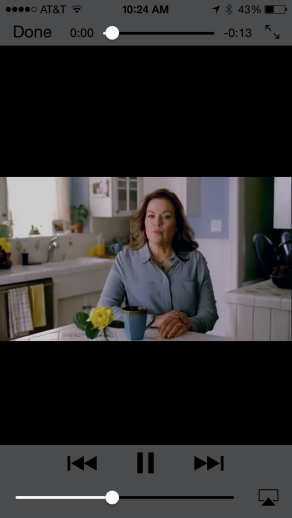 2. The wish lists on the iOS/iTunes stores cannot be shared with anyone. (What good does it do to have a wish list if you can’t tell someone to buy stuff off of it?)

4. It is not possible to view purchased content from anything other than iTunes or an iOS device. The web has evolved, it is time to make everything web centric. Google has done this from the start. It is time Apple followed suit. (They have proven they know how to make compelling web apps, they just did it with iWork)

5. Facetime should be opened as a standard. Give it to Google and Microsoft and allow them to make it the default on their devices as well. We’re well past the point of treating text, phone calls and video calls as anything other than what they truly are; more data.

6. iCloud needs to be fixed. The fix is actually very simple. Allow users to specify the iCloud account to use for each service. See below for an example

7. Magazines are almost dead. That doesn’t mean Newsstand needs to suck. Allow us to see our updated magazines. Don’t hide everything behind an icon.

8. Allow users to delete the default apps. Except for the app store. (Might also help with #7 above.)

9. Place the default apps on the app store so that I can re-download them after I accidentally delete them.

10. Fix the Photos app on iOS devices. It is actually more complicated to find photos now than it was on iOS6. Combine the photos app with iPhoto for iOS. There’s no good readon why both apps exists. They do the same thing.

There has been a lot of ink spilled over the last 6 months about the fact that Apple has lost its luster. Both Wall Street analyst and technology bloggers agree that Apple cannot continue its unrelenting upward trajectory.

In many ways I agree. Now, don’t get me wrong, I am an Apple fan, but I’m also willing to call the kettle black. Apple’s greatest strength is its ability to look within and develop innovative products. The question on everyone’s mind now is whether or not they can continue to do that now that Steve is gone. Only time will tell.

Apple’s greatest strength is also a weakness. They are unwilling (or unable) to acquire assets that will give them a leading market position. They have a lead in downloadable music, but seem uninterested in the market shift to streaming content. They’re either uninterested or they do not believe that streaming content will ever overtake downloads. One potential solution to this problem would be to open up iTunes to the web. Apple could spin it as an improved experience over other competitors. They could allow you to ditch iTunes completely and use just Safari or Firefox to access your content. Doing this would open up iTunes to other platforms that Apple currently doesn’t want to play in, and would allow them to further expand their dominance in the digital entertainment arena.

What do you think? Should Apple open up iTunes to the web?